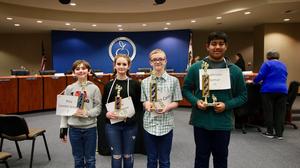 Students from across the district participated in the 24th annual Spelling Bee. Yudhister Kumar, Western Center Academy student, will represent HUSD in the County Spelling Bee.

On Tuesday, January 24, 2020, Hemet Unified School District held its annual Spelling Bee in the District Office Board Room. Western Center Academy student Yudhister Kumar was announced as the winner after he correctly spelled the word “tyrannical”. Yudhister will advance to the county level to compete in the County Spelling Bee.

In order to participate in the district-level Spelling Bee, students from 4th to 8th grade participated in their school’s spelling bee. Students who won first and second place at their site were invited to compete at the district level. Forty-six students attended the event and competed against their peers. After 10 rounds, Yudhister Kumar was announced as the first place winner. Mason Carey from Dartmouth Middle School won second place, Rory Lovette Jensen from Idyllwild School won the third-place spot, and Natalie Jensen from Idyllwild School was named the fourth-place winner.

Students were called up one at a time by the Spelling Bee Master, Michelle Badura. They were able to ask the origin of the word, a definition, and if there were alternative pronunciations. The panel of six judges present was there to ensure students received correct information and spelled their word correctly. A big thank you to this year’s Spelling Bee panel: Sue Breyer, Head Judge,  Dagmar Rea, Judge, Elizabeth Areiza, Judge, Andrew McGuire, the Arbitrator, Sylvia Ortiz, the Timekeeper, Linda Rush, the Challenge Recorder, Karena Chum, the Round Advisor. Also thank you to Director of Elementary Education, Annette Davis-Thole, and Jane Von Duering for your support in creating this year’s district-wide Spelling Bee!

Congratulations to all district-level contestants and our four winners. We wish Yudhister Kumar the best of luck as he competes in the County Spelling Bee on March 24, 2020, at the Moreno Valley Conference and Recreation Center!